Air travel is the second-safest mode of mass transportation in the world.

This is second only to the escalator and elevator. Y

our chances of being involved in an aircraft accident are approximately 1 in 11 million.

Your chances of being killed in an automobile accident are 1 in 5000. The most dangerous part of your flight is the drive to the airport.

All airplanes are designed and built to withstand far more stress than occurs in normal flight, including ordinary and extraordinary turbulence. While it is true that a severe storm could damage an aircraft, this is why flights will divert around or cancel due to
thunderstorms.

Ninety-nine percent of turbulence injuries are from unfastened seatbelts, or falling luggage.

You have more of a chance of dying from the food onboard than being involved in an accident.

Here are my top ten tips for the fearful flier.

1. Don’t conceal it
Tell the gate agent when you check in, the flight attendant when you board, and the passengers around you when you sit down.

It’s nothing to be embarrassed about, and what you need is support, not added frustrations by suffering in silence. I know I make a special effort to check in on my fearful fliers several times during a flight.

2. Treat the turbulence like bumps in the road
Don’t tense up or fight it, but instead, let your body sway with the aircraft movements.

3. At check-in, ask for a seat at the very front of the cabin as possible
Turbulence is usually much greater in the back of the aircraft.

If you have an extreme dread of flying, don’t try to overcome your fears on a long flight. Take the shortest flight you can and preferably in the biggest plane possible.

4. Keep distracted
Watch the movie even if it’s bad or you have seen it already.

Read a book or do a crossword puzzle. Do anything that keeps your mind occupied and not dwelling on morbid possibilities. 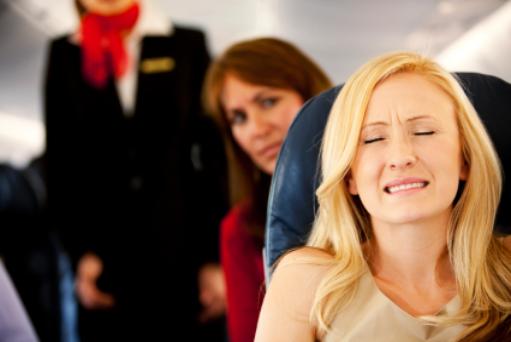 5. There are various classes for those who are afraid to fly
In some cases the final test is an actual airplane flight.
The courses used to be quite expensive, but now with fares being at an all-time low, I am sure the classes are less expensive as well.
Advertise

6. Avoid coffee or other caffeine products
But drink other liquids, as dehydration only contributes to the fear process. Some people recommend a glass of wine to calm the nerves, but don’t overdo it.

7. Listen to peaceful and calming music
Your mind tends to wander and hear sounds that either don’t exist or are perfectly normal flight noises.

Apparently, the pain is a reality bite, and takes the mind off the turbulence.

9. Avoid gory details
When an air disaster does occur, avoid the graphic details and overplay in the news media. It is important to be informed, but too much is too much.

10. Breathe deeply as often as you can
Remember that the sick bag in front of you can be used as an anti-hyperventilating device as well.