MOST COMMON MISTAKES WHEN WE TRAVEL

Overpacking
At home, with your complete wardrobe available, there’s no reason not to run through work, workout and working-the-clubs outfits in a single day.

But when your life is crammed into a couple bags, your fashion morality changes.

Those socks you wore on the plane should be good for another go.

The purple tee you slept in ought to be alright for a third wear.

According to a recent survey by Travelodge, two-thirds of travellers typically return from a trip with at least six unworn outfits.

Not buying something you like as soon as you see it

You think you’ll see a cheaper, better version somewhere else.

That evocative street painting or those Metallica nesting dolls you didn’t buy? Now not having them will haunt you for the rest of your life.

When you see something you like, just buy it and live without regret.

Not checking your phone plan before traveling abroad

A week of texts from Singapore or St. Lucia shouldn’t cost more and hurt worse than open heart surgery. But it happens all the time to travellers who fail to check their phone plans before departure. 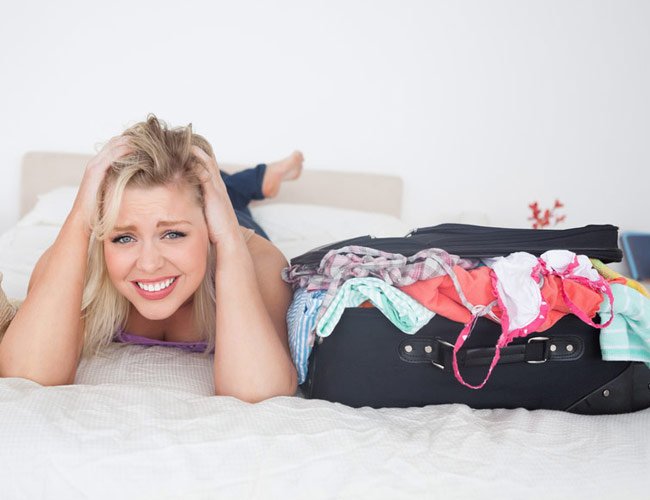 When you find the money you saved on your “near city center” hotel is being spent on 30-minute commutes and outrageous taxi fares, you know you’ve committed one of the cardinal sins of travel.

Related note: Except by purely technical definition, if you’re staying near the convention center in Portland, Oregon, you’re decidedly not staying “downtown” (as is popularly advertised) by any local sensibility.

Not tightening shampoo caps … all the way
Perfect way to ruin an arrival — shampoo snot.
Those cute, little trial-size shampoo and conditioner bottles are really handy — until they magically burst open in-flight, spreading a layer of glycerol soap snot all over your bag.

Trying too hard to chisel out a bargain
Congrats, you just saved 50 cents. Now go get your blood pressure checked.
There’s no faster way to become embittered with the locals than going toe-to-toe with a market full of hungry sales people and shopkeepers.

Yes, we understand there’s principle involved, but do you really need to whittle the equivalent of fifty cents off the price of an embroidered handbag that’s going to sit in the back of a closet anyway?

Just buy the damn thing and spare your heart the cortisol burst for when it actually needs it.

Not changing money at the airport

When you travel internationally, the conventional wisdom is that only amateurs change money at the airport, because the exchange rate for foreign currency will be better in town.

It usually is, but often not by that much.

A recent check of the dollar-to-pound exchange rate in London Heathrow was $1.71 to £1 (with no commission for changes more than $300).

Near Oxford Circus the exchange rate was advertised at $1.62 to £1, also with no commission.

So, you can hit the city like a cashless bumpkin and spend an hour hunting up an acceptable place to change money or, for less than £10, arrive with some local coin in your pocket.

Convenience factor alone makes it worth changing at least a nominal amount of cash at the “ripoff” place at the airport.

Over-reliance on guidebooks
Making a travel plan using only your guidebook is like making a plan to stand in line at the bank for a week.

Guidebooks are great — we use them all the time — but it’s best to pull just one or two suggestions per day from a guide that thousands of like-minded travelers have read or downloaded.

Not buying the full insurance policy
We’re not a bunch of free spenders — except when the boss whips out the company credit card at the pub — but a lot of the mistakes on this list come down to adding a significant amount of stress to your life in the name of saving a few bucks.

If you actually end up needing the travel insurance you purchased (a move a significant percentage of our staff thinks is silly in the first place), you’re going to want the full coverage.

Just because you’re in a country where the beer is cheap, it doesn’t mean the healthcare is.

That bargain insurance policy might pay for your flight home when you crash your motor scooter on a winding road in some island paradise.

But it won’t cover the $5,000 in stitches and sponge baths you racked up during your three-day international hospital stay.

It’s a nightmare come true when you get turned away at the ticket counter on departure day because you didn’t realise Brazil requires citizens of your benighted country to secure a visa before travel.