The best luxury hotels in Paris, chosen by the daily telegraph.

Four Seasons Hotel George V
Palatial comfort, space, gastronomy and the most remarkable flower displays in town sum up the sumptuous George V, crowning it over Avenue George V in the Champs-Elysées golden triangle, with countless discreet staff lurking behind the scenes to lay on every need. 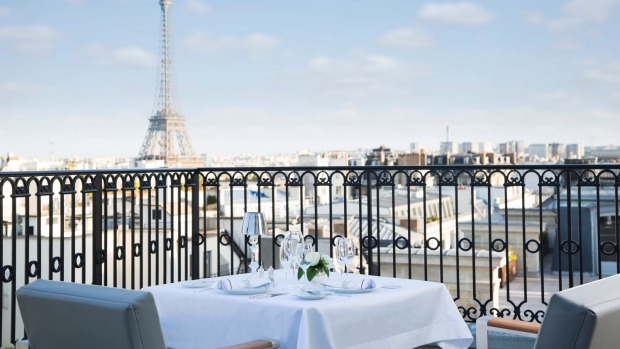 View from the Peninsula Paris

A Chinese restaurant contrasts with a rooftop French restaurant and terrace.
The 200 rooms, combining comfort and technology, are very spacious.

La Réserve Paris Hotel
Expect guests that don’t blanch at suites that cost four figures a night at La Reserve: Parisians from the surrounding eighth arrondissement; politicians from the neighbouring Elysée Palace; fans of other properties belonging to the multi-millionaire owner Michel Reybier, and of the anti-aging Nescens spa treatments.

Shangri-La Hotel
Originally the private mansion of Roland Bonaparte, eccentric botanist and great-nephew of Napoleon, the 101 suites and bedrooms evoke a grand classical lifestyle, some with balconies from which you can almost touch the Eiffel Tower across the river.

Le Meurice
Stands out among the Paris palaces with its prime position on arcaded rue de Rivoli, just minutes from the Louvre.

Past guests, who included Salvador Dali, and superb staff get the right balance between obsequious and witty. Rooms are awash with pastel-toned satin and Louis XVI chairs.

Hotel Plaza Athenee
This ‘Palace’ hotel (a notch up from five-star) drips with luxury on one of Paris’ most fashionable streets, close to the Champs Elysees. Expect opulent interiors, a Dior spa and an Alain Ducasse Michelin-starred restaurant.

Le Royal Monceau Raffles
On the avenue between the Arc de Triomphe and Parc Monceau, grand Royal Monceau was reborn after a Philippe Starck makeover as a self-proclaimed luxury art hotel, complete with gallery, art concierge, concept store and cinema.

Prince de Galles
A smart, compact, and extremely stylish 1920s hotel on Avenue George V, in the heart of the 8e designer district.

The spirit of its original Art Deco design has been captured throughout, from the mosaic floor of Les Heures bar to the rooms which feature macassar veneer furniture and two-tone patterned carpets.

The airport is located within portions of several communes, 25 km (16 mi) to the northeast of Paris.
The airport serves as the principal hub for Air France as well as a European hub for Delta Air Lines.