This a fun, exuberant hotel, an unashamedly kitsch yet lovable establishment that will have you grasping for Spanish words of exclamation you never thought you knew. The bedrooms  each one decorated differently  are full of warm Latin colours and throws; the bathrooms are fantasies made of tiles. There’s a lounge bar and a restaurant-cum-tapas bar, too, so who cares that Camberwell is still so far from the tube?

Stylotel
Taking their lead (perhaps a tad pretentiously) from Le Corbusier’s maxim that “the house is a machine for living in”, the owners of Stylotel have attempted to break away from the fusty old conventions surrounding the feel and look of a hotel.

The two 19th-century townhouses inside which it resides are the only things not ultra-modern about the place. Aluminium wall coverings, floor to ceiling mirrors and illuminated glass furniture are in.

As is a lounge (sorry, stylolounge) designed for “well being”, and bedrooms sleeping one, two, three or four (a “quatro styloroom” of course), which does seem eminently sensible. Oh, and it’s very useful for Paddington station. 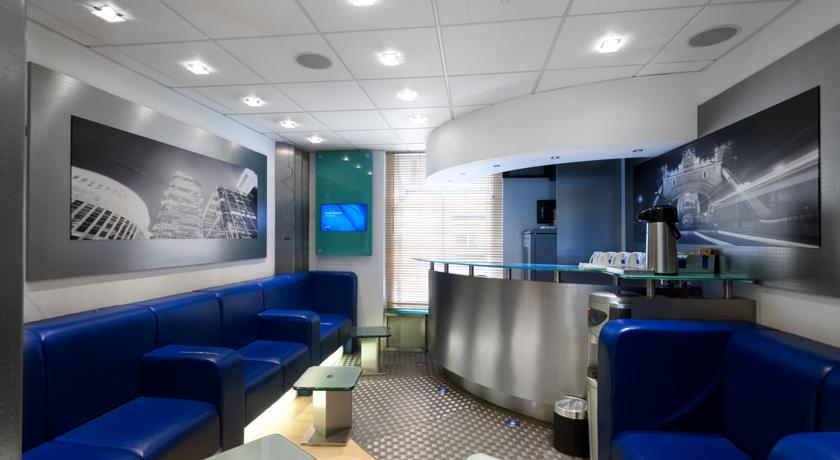 Arosfa Hotel
Say what you will about the Pre-Raphaelite Brotherhood, they had darned good taste when it came to choosing a residence. Sir John Everett Millais he of Ophelia drowning decorously in a river fame lived in this dark-brick Georgian townhouse before it became a hotel.

Ironically, it’s become an ideal spot for lovers of words rather than images, with Europe’s largest academic bookstore right opposite, a clutch of new and second hand bookshops nearby, and the British Library not too far up the road.

The bedrooms have been recently redecorated (check out those Audrey Hepburn cushions) and there’s a garden in which you can read whatever amazing finds you make during the day.

The source of influences inside the Victorian townhouse range from Europe to the Orient (the Far East, rather than Leyton) and each bedroom sports hand-carved furniture. The bathrooms are awash with marble and the whole effect is one of boutique luxury.

The hotel is situated in a quiet garden square handily placed for both Earls Court Exhibition Centre and the tube station. If you nab one of the smaller rooms, there aren’t many four-star hotels in London at which you’ll pay less.

Avo Hotel
The word “avo” is apparently not just a lazy shortening of avocado but means “welcome” in a number of languages.

Chic is the other byword here – expect modern design, subtle lighting, black tiles, chrome fittings and an altogether sexy feel to your living quarters, with most of the rooms fitted out with king-size beds (and Egyptian cotton sheets, of course).

Dalston, which has firmly established itself as the trendy bit of Hackney, now also comes with its own shiny new tube station. But the Avo is also handy for trips to the Hackney Empire, and for getting down with the hepcats and hipsters at the London Fields lido.

55
Modern and swish – that’s what you get at Hangar Lane’s 55. Its 26 bedrooms (all doubles, for some reason), done out in muted colours with all mod cons, make for excellent crash pads (particularly since their king-size beds all have orthopaedic mattresses).

The minimalist illuminated garden provides a chilled setting for a quiet drink in the evening. There’s also a Momo Japanese restaurant downstairs and a 24-hour lounge bar featuring work by Sudhir Deshpande (India’s Jackson Pollock, apparently, so a must for all drip-art fans).

The booking system is based on supply and demand, so catch a quiet day or book well in advance and you’ll nab a bargain.

Arran House Hotel
A veritable Mecca for social history buffs. The family that owns the Arran House has dug into the history of both the Georgian residences that now make up the hotel.

So, while you’re relaxing on your comfy bed or slumped in the depths of one of the lounge’s sofas you can mug up on those who called this place home, including a doomed musician, a distinguished sculptor and a would-be media baron (anyone read a copy of the Illustrated Police News lately?).

Should you tire of history, there’s a private rose garden, a DVD library, and swathes of 21st century London on your doorstep.

The Hoxton
Famous for its periodic £1 room sales (the 500 up for grabs went in 10 minutes last time out), the Hoxton burst on to the scene a few short years ago and has scooped a hatful of awards already. Though its designer chic stylings can still be pretty pricey during the week, on Sundays the rates go into free fall if you book up early, making it a glam base for forays into Spitalfields Market, Old Street or Brick Lane.

A mini-breakfast is delivered to your room, though if the yoghurt, orange juice and banana leaves a hole, you can supplement it reasonably cheaply at the Hoxton Grill restaurant next door.

The Pavilion
Usually it’s wise to steer a wide berth around any hotel described by its owners as “groovy”.

In the case of The Pavilion, however, you may make an exception. With each of its 30 rooms given a singular style, from Honky Tonk Afro (a 1970s tribute) to Casablanca Nights (somewhere between art deco and the dream a Moor had one night after eating one too many tagines), it’s no wonder the hotel has attracted the custom of so many luvvy/modelly/muso types from Helena Bonham Carter and Naomi Campbell to Jarvis Cocker and, er, Duran Duran.

What is extraordinary is the lack of a rock star bill as you celeb-spot over your continental breakfast.

Jesmond Hotel
Another example of a cracking good value Bloomsbury hotel. (Why do so many good ones congregate in the area?) Run by the Beynon family since 1979, the hotel was built as a private residence in 1786 at the behest of one Gertrude Duchess of Bedford, no less, and is typical of the graceful Georgian style.

The place is elegantly furnished throughout, with many of the bedrooms retaining their original fireplaces complete with marble surrounds. The jewel in the Jesmond crown, however, is its traditional English garden, designed and created by a member of the family, which provides a peaceful haven for when the British Museum gets too much.