But technologies being introduced beginning this year should increase that number before 2017 rolls around, and more innovations are in the works for next year.
“We have to wait and see how fast airlines can install it on their aircraft, but the direction is definitely up,” said Jason Rabinowitz, Routehappy’s data research manager.

The most recent provider to roll out an in-flight WiFi upgrade was market leader Gogo, which introduced its new 2Ku satellite-based technology late last year. Until then, the company offered two earlier and slower WiFi technologies: air-to-ground, which offers speeds up to 10 megabits per second (Mbps) but can only be used over land, and Ku, an air-to-satellite system that offers speeds between 3 and 8 Mbps but can be used over water. 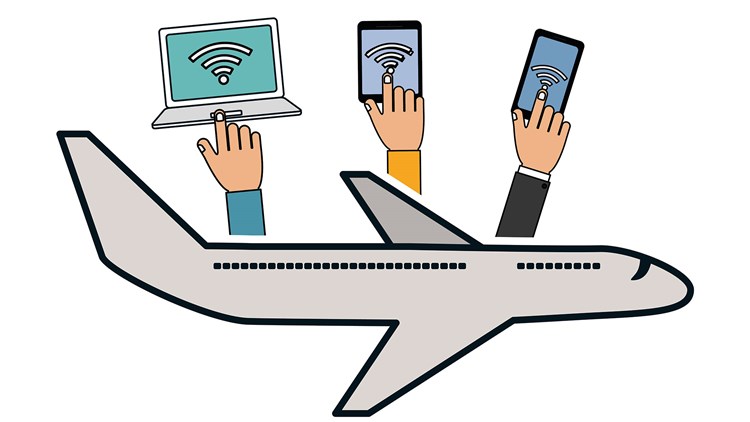 2Ku differs from Ku in the number of antennas it uses: one for Ku and two for 2Ku, which more than doubles Ku bandwidth, according to Gogo.

So far, 2Ku deployment has been slow. Gogo has equipped approximately 2,500 planes with WiFi connectivity: 2,300 with ATG systems and 200 with Ku systems.
Upgrading planes to 2Ku from Ku is a much simpler process than retrofitting them from ATG to 2Ku. Making the latter switch is a costlier installation and puts a plane out of commission longer.

At the moment, Gogo said it has an 800-order backlog for upgrades to 2Ku service, though Aeromexico has already begun employing 2Ku technology, Gogo spokesman Steve Nolan said.

Next in line for Gogo’s 2Ku rollout is Virgin Atlantic, Nolan said, and he added that Delta, which plans to equip more than 250 aircraft with 2Ku antennas, is also slated to begin its rollout by the end of March.

Gogo claims that 2Ku’s performance will be similar to what a person would experience with land-based WiFi, including the ability to stream videos.
Rabinowitz was a bit less bullish, saying that during a test flight he was on last fall it worked “moderately well.”

“It was definitely better than your traditional global-coverage WiFi,” he said.
With Gogo’s 2Ku now already entering service, the next in-flight WiFi innovation to launch is expected to come in April from Panasonic Avionics, which spokesman Brian Bardwell said counts United, American, Emirates and Lufthansa among its airline customers.

Through a service contract on a newly launched satellite, Panasonic plans to offer a five-fold upgrade in bandwidth, to as much 200 Mbps, on any route that flies any city pair that lies between the West Coast of the U.S. and Europe.

The new satellite, called a High-Throughput Satellite, enables Panasonic to deliver its WiFi signal via spot beams targeted at portions of the world that get the most airline traffic.
That efficiency won’t just improve speed, Bardwell said; it will also reduce cost. Panasonic is selling the service to airline clients at prices that are less than half its current rates.
He also said that deployment by the airlines should happen as soon as the service becomes available, since High-Throughput technology will work with the equipment already installed on clients’ planes.

A second High-Throughput Satellite launch will enable Panasonic to extend the service to the Middle East in October, Bardwell said, with service farther into Asia slated for the second half of 2017.

The other primary providers of in-flight WiFi in the U.S. don’t have any major technology upgrades planned for this year, though the satellite company ViaSat, which provides what is currently regarded as the fastest WiFi in the sky, is adding Virgin America to its client base.
Working through the provider Thales, ViaSat already supplies WiFi to JetBlue and the old Continental portions of United’s fleet. The service is delivered on Ka-band satellites, which operate at a higher frequency than Ku satellites.

But while the ViaSat service is fast, customers on JetBlue flights to the Caribbean can tell you that it’s limited by its spacial coverage, which is confined to the continental United States and the nearest edges of Mexico and Canada.

ViaSat will offer a partial fix to that problem this year in the form of a hybrid Ka/Ku satellite that Virgin America, pending federal certification, will put to use on routes between the mainland and Hawaii as soon as this summer.

But ViaSat plans to offer much more comprehensive improvements in mid-2017 with the launch of its next generation ViaSat-2. The satellite will double ViaSat’s WiFi speed, said Don Buchman, the company’ s vice president of commercial mobility, while increasing its geographic coverage sevenfold. Along with the continental U.S., ViaSat-2 will cover Canada, the Caribbean, Mexico and Central America as well as the North Atlantic routes to Europe.
In addition, ViaSat has entered into a joint venture with a European satellite provider that will connect its network as far east as Istanbul.

ViaSat-2 is slated to be followed in 2019 by the launch of ViaSat-3, an even faster broadband platform that will make the satellite provider’s Ka-band global.

Global Eagle, the final major provider of airline WiFi in the U.S., counts Southwest as well as several international carriers among its customers. Like Panasonic, Global Eagle plans to roll out a fast Ku-band service via High-Throughput Satellite technology. The satellite will launch early next year, company spokesman Paul Sims said.

In its Annual Global State of In-Flight WiFi report last month, Routehappy wrote that U.S. airlines now offer at least spotty service on 78% of their available seat miles. While coming upgrades should make that spottiness less common, Rabinowitz said only time will tell for sure.

“It all sounds great,” he said. “But we’ll have to wait and see once we get on an aircraft.”