Grafton on Sunset
Screaming LA-esque rock’n’roll vibe, this recently renovated boutique hotel is young and wild at heart, and won’t burn a hole in your pocket. In the heart of WeHo on Sunset Strip, the room walls feature an image of a crowd at a rock concert; funky light fittings throw a spotlight effect across the room and mirrors elongate.

Throw in fire-engine red pillows on a comfy L-shaped lounge, flourishes of gold on coffee tables and lampshades and faux-fur throws for the full-throttle effect. Guests can relax by the chlorine-free saltwater pool before heading to nearby rock icons such as the Whisky-a-Go-Go and the Rainbow Bar & Grill.

The Line, DTLA
Yet another stellar innovation from LA chef Roy Choi, The Line gives you little reason to leave the hotel. White, bright rooms are industrial chic with splashes of colour on furnishings from a local Venice artist, and offer expansive floor-to-ceiling views towards the Hollywood Hills.

Head to Commissary, the greenhouse restaurant nestled alongside the rooftop pool, sample Korean at Pot and breakfast with delicious baked goods in the cafe. Don’t miss ’80s-themed bar Break Room 86 – if you can find its secret entrance.

The London, West Hollywood
The epitome of understated glamour and style on Sunset Strip, The London is a firm favourite. Decadently sized, bright rooms include all mod cons, boasting views of DTLA down to Santa Monica, or Hollywood Hills from the balcony.

The hotel has outstanding service, including a driver for travel within two kilometres of the property. It is also home to one of the best rooftop pools in LA, with 360-degree views of the city, coupled with sensational cocktails from the bar alongside.

If you can tear yourself away, it is in walking distance of some of the best shopping, bars and restaurants WeHo has to offer. 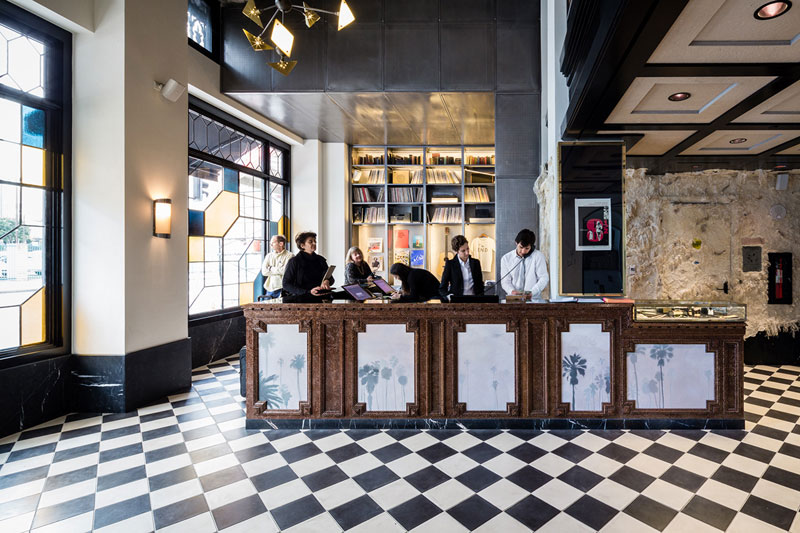 The Ace Hotel, Downtown LA
Situated in the historic United Artists building, the Ace shouts hip in an area whose vibe is off the charts, making it an ideal base from which to explore the ever-growing repertoire of restaurants and bars.

In typical Ace style, rooms are rustic and range from small for individuals to lofts and suites, some of which include unique embellishments such as an acoustic guitar or a turntable with a curated selection of vinyl from Amoeba Music.

There’s public spaces peppered throughout – grab a lounge by the rooftop pool and view the ornate building surrounds or pep up your day with a Stumptown brew from the Coffee Counter in the lobby.

Rooms from $423 a night; acehotel.com

Chateau Marmont
Where Hollywood’s rich and famous check in, some never checking out.

Like its name suggests, the Chateau is a secluded castle in the Hollywood Hills within spitting distance of the throbbing nightlife of the Strip below. Packed full of rock’n’roll history, anyone can grab a drink at the bar and reminisce about the time Jim Morrison notoriously dangled from a suite balcony. Inside, it’s all classic Hollywood mid-century glamour.

Large suites can contain formal dining rooms, terraces, private entrances with carports and direct access to the pool via private walled gardens – not to mention thick soundproofed walls and a reputation for hedonism.

All rooms include a full kitchen, record players with a selection of vinyl and – blissfully – a washer/dryer. Private balconies offer views of iconic Hollywood sights such as the sign or the neighbouring Capital Records tower, and there’s a 24-hour hosting service.