1. Atomium
The Atomium is a building in Brussels originally constructed for Expo 58, the 1958 Brussels World’s Fair. Designed by the engineer André Waterkeyn and architects André and Jean Polak, it stands 102 m (335 ft) tall. Its nine 18 m (59 ft) diameter stainless steel clad spheres are connected so that the whole forms the shape of a unit cell of an iron crystal magnified 165 billion times. It is a museum.

Tubes of 3 m (9.8 ft) diameter connect the spheres along the 12 edges of the cube and all eight vertices to the centre. They enclose stairs, escalators and a lift (in the central, vertical tube) to allow access to the five habitable spheres which contain exhibit halls and other public spaces. The top sphere includes a restaurant which has a panoramic view of Brussels. CNN named it Europe’s most bizarre building. 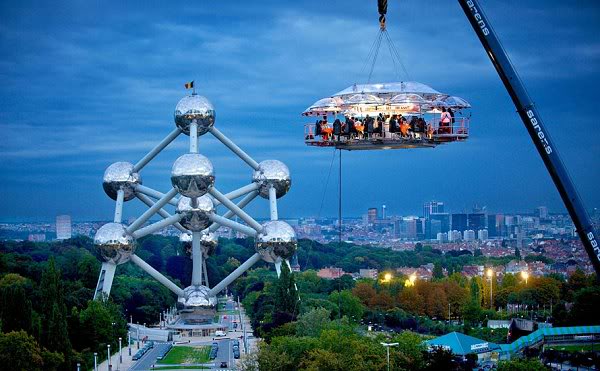 2. Grand Place – Grote Markt
The main attraction and is a World Heritage site According to Unesco is the famed Grand Place/Grote Markt area in the Center of Brussels of which is the main public square of which where the opulent guildhalls and two larger edifices, the city’s Town Hall, and the Breadhouse (French: Maison du Roi, building containing the Museum of the City of Brussels is located.

The Grand Place was started in the 12th century of which three indoor markets were built, namely a meat market, a bread market and a cloth market and then due to the prosperity of the town, several guildhalls and much commerce was built in the area and nowadays there are many shops, bars, restaurants and souvenir shops within the square and the vicinity of it where you can shop, eat, have coffee and hang around and savor the sights.

3. Manneken Pis
Only a short 5 minute walk south from the Grand Place along Rue De Charles Bus and then to Rue De Effuve’ will take you to the most famous statue in Brussels which is the cheeky Mannekin Pis.

This small 61 centimeter bronze statue, made by local artist Jerome Duquesnoy in 1619 is a regular small boy which is taking a pee to the fountain basin below of which the statue is now a replica as the original is now housed in in the King Place (the Breadhouse just across the Town Hall in Grand Place where the more than 700 different clothes that the mannekin pis statue is dressed differently everyday is also housed).

4. Cathédrale of St. Michael and St. Gudula
The Cathedral of St. Michael and St. Gudula are the Main Roman Catholic Churches of Belgium and are the seat of the Archbishop of Brussels and where many of the Royal and State Ceremonies as done. the Church was renovated a few times since it was made in 1047 AD of which the Latest Design is Neo Gothic of which is closely resembles the Notre Dame of Paris. The Cathedral originally was a chapel dedicated to St Michael and in the 11 th century AD it was rep!aced by a Romanesque church which became a “collegiale church” in 1047 AD. The relics of St Gudula were transferred there. From then onwards, it became known as “the collegiale church of St Michae! and St Gudula”.

5. Mini Europe
The Mini-Europe exhibition attempts to boil down the essence of Europe into a 24,000 meter square park filled with 350 scaled down buildings. It’s detailed, accurate and big: with a 25:1 scale Big Ben is four meters tall, and the Eiffel tower as high as a three story building. There’s a lot of little details, quite a bit of dynamic scenery, vehicles that move around the park, and even some interactivity.

6. Galeries Royales Saint-Hubert
The Galleries Saint Hubert, built in 1846, feature luxury shops and cafés, a famous tavern, a cinema and a theater. They provide a link between the surroundings of the Town Hall Square and the National Opera. Smaller side galleries are the universe of antiquarians and librarians…. Nice place to visit specially if its a sunny day.

7. Palais Royal de Bruxelles
In my previous visit, we didn’t approach the royal palace – I didn’t inform the king of my visit to Brussels, and I always knew that it is impolite to appear without announcement.
In the recent visit we had a closer look, but again without an invitation, we didn’t enter. Only back home In read in the official site that it may be visited and:

“The Palace is where His Majesty the King exercises his prerogatives as Head of State, grants audiences and deals with affairs of state. Apart from the offices of the King and the Queen, the Royal Palace houses the services of the Grand Marshal of the Court, the King’s Head of Cabinet, the Head of the King’s Military Household and the Intendant of the King’s Civil List.

This museum in Brussels is the newest and largest Musical Instrument Museum that I know of, but there are also some very interesting ones in other European cities such as Paris, Berlin, Stuttgart and Nürnberg.

9. Guild Houses
The Guildhalls around the Grand Place started in the 14th century when Brussels was becoming prosperous and which many artisans and craftsmen build the guildhalls around the square of which most are still standing today of which many of them still sell artisanal arts and crafts and food stuffs and the guildhalls are the following: Maison des Boulangers (bread) , La Brouette (wheelbarrow) , Le Sac (The Bag), Le Cornet (The Horn), La Louve (The She-Wolf), L’Étoile (The Star) and a lot more.

10. Palais de Justice Bruxelles
The Palace of Justice or Supreme Court of Belgium is located in the upper area of ​​the city, Saint Gilles, on the way to the Avenue Louise, in an area formerly known as Gallows Hill. This location gives a panoramic view of the city. The building was designed by architect Joseph Poelaert, who died 4 years before its completion in 1883. The style is described as eclectic, inspired mainly Assyrian-Babylonian

Brussels Airport is an international airport 6 NM northeast of Brussels, the capital of Belgium. In 2015, more than 23 million passengers arrived or departed at Brussels Airport, making it the 21st busiest airport in Europe.