Frankfurt is the fifth largest city in Germany, which a member of the European Union.

Located on the Main River, it is also the largest financial centre in the continent since it is home to different commercial banks such as European Central Bank and Deutsche Bundesbank.

The Frankfurt Stock Exchange is also located in this city, which is one of the world’s largest stock exchanges by market capitalisation. Frankfurt has temperate-oceanic climate, which means that it has warm summers and moderately cold winters.

The average temperature of the city per year is 10.6 degrees Celsius. The city is sometimes referred to as “Mainhattan”, a combination of the United States’ Manhattan and Main River because of its high-rise buildings and scenic skyline.

What To See & Do
In Germany, Frankfurt is one of the most famous tourist destinations.

It is home to different galleries, theatres, opera houses, and clubs. Famous galleries in this city include the Municipal Gallery of the Stadel Institute of Art, Museum of Applied Art, and the Schirn Kunsthalle Gallery.

They city also houses a town hall called Romerberg, which offers tourists a good view of old buildings dating from 14th and 15th centuries. One of these buildings includes the Archaologische Garten, where people can see the Roman settlements during the old times. There is also a bridge near the Main River, known as the Eiserne Steg.

This 19th century bridge leads visitors to Sachsenhausen and the Rententurm or the Wharfinger’s Tower.

For opera lovers, Oper Frankfurt offers high quality productions at an affordable price. Another is the English theatre, which is the largest English-language theatre in Europe.

Unlike the other buildings in the city that were destroyed during the World War II, Sachsenhausen’s old town is preserved.

Visitors should not miss Saint Bartholomeus’ Cathedral, which is located next to the Romerplatz.
Built in Gothic style during the 14th century, the main cathedral has spiral stairs leading to the 95-metre church tower.

The best view of Frankfurt’s skyline is located on the eastern part of Main River Bridge. 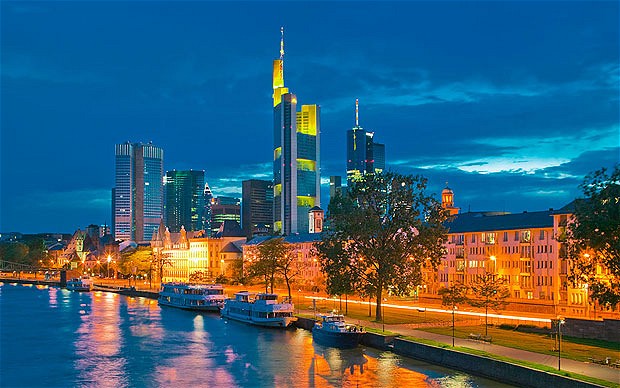 People can also go to Sachsenhausen for the Henninger Turm, which is one of the highest silo towers in the world at 330 feet.

The city is also a great place for shopaholics since most shops are open until 8:00PM.
The main shopping street in Frankfurt is the Zeil. It features department stores and malls like Karstadt, Galeria Kaufhot, Zeilgaleria, and MyZeil.

How To Get Around Within Frankfurt
The best way to explore Frankfurt is by tram and bus. Aside from single tickets, tourists can also get all-day and weekly tickets.

For those who would like to visit museums and different tourist destinations, they should consider buying a Frankfurt Card since it allows unlimited travel in the city and offers discounts in some museums.

These tickets can be purchased at the airport and not at the vending machines. Frankfurt Card is relatively cheaper compared to single tickets combined. There are also many taxis in the city but the fares are quite expensive.

There also rental-bike companies in Frankfurt like the Deutsche Bahn, which can be found in many street corners and major pick-up points in the city. These bikes are available from April to December and rented using credit cards.

How To Get There
To explore the old and modern buildings in Frankfurt, tourist can take any airport transport providers that can fly them to the Frankfurt Airport. It is the third busiest airport after the London Heathrow Airport and Paris-Charles de Gaulle Airport. A total of 107 airlines fly to and from 275 destinations served by this airport. It is a major hub for AeroLogic, Condor, and Lufthansa.

Frankfurt International Airport
Flughafen Frankfurt am Main, also known as Rhein-Main-Flughafen) is a major international airport located in Frankfurt, the fifth-largest city of Germany and one of the world’s leading financial centres.

It serves as the main hub for Lufthansa including as well as Condor and AeroLogic.

The airport covers an area of 2,000 hectares (4,942 acres) of land and features two passenger terminals with a capacity of approximately 65 million passengers per year, four runways and extensive logistics and maintenance facilities.

Frankfurt Airport is by far the busiest airport by passenger traffic in Germany, the third busiest in Europe after London Heathrow and Paris Charles De Gaulle Airport and the 17th busiest Worldwide in 2015, posting record passenger traffic with 59.6 million passengers using the airport in 2014, an increase of +2.6% from 2013. As of winter 2012/2013, Frankfurt Airport served 264 destinations in 113 countries, making it the airport with the most international destinations in the world.