KLM employs Sherlock the dog detective to find owners of forgotten items left on planes… by tracking their scent!

KLM Lost and Found at Amsterdam airport just got a whole lot cuter, with the introduction of an investigative beagle.

Airline KLM has employed a cute, uniform-wearing dog to help reunite passengers with lost items that they leave behind on planes.

The pooch – appropriately named Sherlock – uses its tracking skills to smell the lost item then dash through Amsterdam Schipol Airport to find the appropriate owner.

The energetic beagle can be seen bounding through the airport with mobiles and headphones tucked in his pouch and even carrying stuffed toys back to their rightful owners.

A video released by the airline shows how Sherlock is doted on by staff. 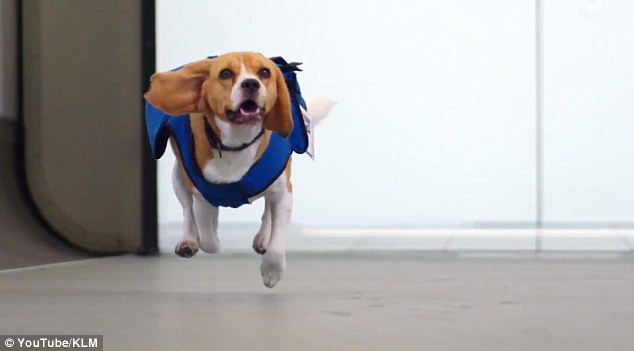 Sandra List, a member of KLM’s Team Lost & Found said: ‘I think he is a real asset to the company

‘Our main goal is to return lost items to owners as fast as possible. I really love that we’re getting some help with that.’

But rescuing abandoned items from planes is a tough job and Sherlock certainly needed some training.

His handler Dirk van Driel, explained: ‘We train for muscle strength endurance and of course socialisation.

‘When you see the reactions of the passengers that really is amazing.’

Sherlock has become something of a star at the airport, with grateful customers posing for selfies with him and staff showing him with attention.

One woman who works on KLM’s check-in desk said: ‘He drops by regularly but I have to admit I do spoil him a bit.’