Origin and destination passengers are those who begin or end their trips at LAX rather than connecting.

LAX is the 5th busiest airport in the world and has nine passenger terminals including the newly renovated Tom Bradley International Terminal.

It is the only airport to have a US Coast Guard Air Station on-site.

Gateway to Southern California, passengers can find all kinds of airport information from various sources such as listening to LAX Air Radio 530, picking up a copy of LAX Magazine, or watching videos on You Tube. 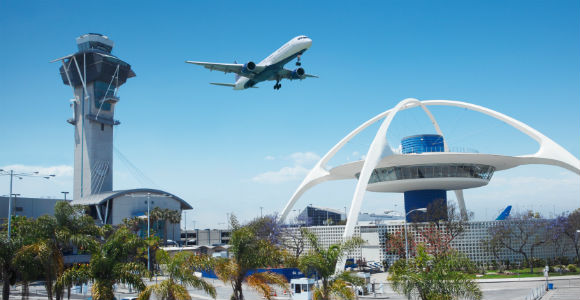 There also are several major airfield and facility projects, including a replacement Central Utility Plant, new taxiways and taxi lanes, and multi-million-dollar renovations to other terminals undertaken by both LAWA and the airlines.

In 2010 the Observation Deck at the LAX Theme Building (designed by Disney) reopened after being closed since 9/11. Fully renovated, the deck is open Saturdays and Sundays from 8 a.m. to 5 p.m. and is free to the public including free telescopes (parking fees apply).

Federal Aviation Administration employees control the air space above LAX and ground controllers handle their duties for each of the four runways.

Flight data and gate-hold positions are operated from the central position of the tower cab.