As the wealthiest nation in Europe and one of the founding fathers of the EU, it’s safe to say little Luxembourg is punching well above its weight.

But as well as the highest per capita income on the continent, this diminutive country also has more than its fair share of natural beauty with rolling hills, verdant valleys and meandering rivers painting picture of rural idyll. 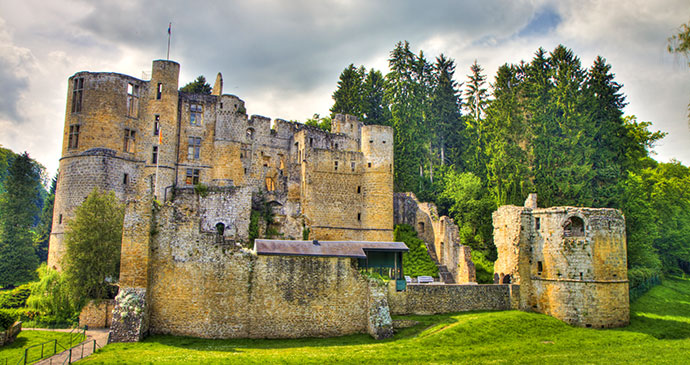 Proud of its role as a founding member of the EU, Luxembourg plays a prominent position in European affairs and is home to a number of European Union institutions.

Most of the action takes place in the capital, Luxembourg City, which has something of a split personality: while it’s all antiquated charm in the Old Town, with its elegant squares, imposing churches, independent shops and cobblestone streets, the Kirchberg district has a modern, flashier feel thanks to its ubiquitous offices, shopping malls and entertainment complexes.

The most popular destination outside the capital is medieval Vianden in the northeast, with its cobbled streets and hilltop castle, which is the envy of many European cities. Vianden also hosts a range of festivals and events throughout the year, many of which celebrate its historical past.

Echternach, founded in the 7th century, is the oldest city in the country, with a picturesque centre dominated by an abbey. It is also a convenient base for exploring ‘Little Switzerland’, a tiny region of rocky outcrops, cliffs, cascades, and forests, crisscrossed by walking trails that are a haven for hikers and mountain-bikers.

On the southeastern border with Germany, the Moselle Valley enjoys a unique microclimate that has given rise to one of Europe’s smallest wine-growing districts, producing award-winning whites and sparkling wines. Meanwhile, northern Luxembourg is dominated by the Ardennes, an area of high plateau where wooded valleys, shimmering rivers and lofty peaks make for stunning trekking.

All in all, not bad for a country the size of Dorset.

Luxembourg Findel Airport (IATA: LUX, ICAO: ELLX) is the main airport in Luxembourg.
It is Luxembourg’s only international airport and is the only airport in the country with a paved runway.

Luxair, Luxembourg’s international airline, and cargo airline Cargolux have their head offices on the airport property.