Sydney the oldest, biggest, and most beautiful of all Australian cities, lies amid a seductive intermingling of land and sea.

Glide along the glittering harbor on a ferry, see the white sails of the Opera House gleaming in the sunshine, and admire the graceful arch of the Harbour Bridge and it’s hard to imagine this vibrant state capital was once a brutal convict colony.

In 1788, it was at Sydney Cove where Captain Arthur Phillip, commander of the First Fleet, established the first British colony in Australia.

Today, visitors can explore Sydney’s fabled history in the narrow cobbled laneways and historic buildings of the Rocks, at the city’s excellent museums, and the rock paintings of the Gadigal aboriginal people who once thrived on this land.

Sydney still fizzes with the adventurous spirit of its settlers. Visitors can climb the harbor bridge, surf the green-barrel breaks at Sydney’s golden beaches, or fly over the city on a scenic tour. And national parks surround the city providing appealing day trip possibilities.

This graceful building, shaped like shells or billowing sails, perches on a finger of land surrounded by water. Snap a photo while gliding by on a harbor cruise, relax at one of the restaurants, stroll around its exterior, or take an organized tour of this magnificent structure, which encompasses theaters, studios, exhibition rooms, a concert hall, and cinema.

Avid photographers head to Mrs Macquarie’s Chair for one of the best photo opportunities. 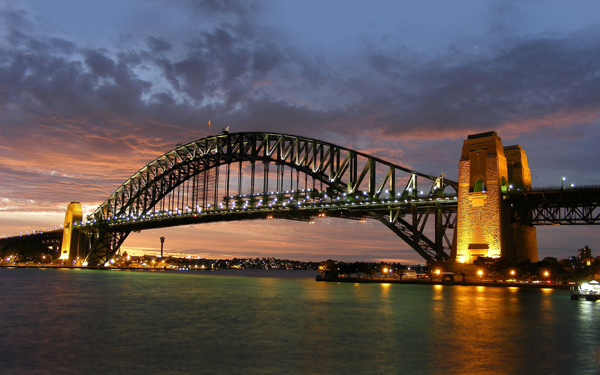 The Sydney Harbour Bridge
or “Coathanger,” as the locals call it, was the city’s best-known landmark prior to construction of the Opera House.

Supported by massive double piers at each end, it was built in 1932 and remains the world’s largest steel arch bridge, connecting the harbor’s north and south shores in a single curve rising 134 m above the water. Along its length run two railway lines and eight lanes for road traffic, the direction of which can be varied according to traffic flow.

Increasing bridge traffic encouraged construction of a harbor tunnel in 1992 to ease congestion, but motorists can still drive over the bridge for blue water views. Pedestrians can stroll across on walkways or join a guided ascent through BridgeClimb for a breathtaking panorama of the city and harbor.

To learn about the fascinating history of the bridge’s construction, visit the museum in the southeastern pier.

The Rocks
On a tongue of land protruding into Sydney Harbour, the Rocks historic area was once home to the Gadigal aboriginal people and later became the country’s first site of European settlement.

The name of the Rocks comes from the rocky coast on the west side of Sydney Cove, where the convicts pitched their tents.

First stop should be a visit to the Rocks Discovery Museum, which traces the area’s fascinating transformation from traditional aboriginal lands, to convict slum, to tourist hotspot.

Afterwards, wander around the narrow cobbled streets with their souvenir shops, restaurants, cafés, and aboriginal and contemporary art galleries, or shop at the market stalls. Guided tours run the gamut from aboriginal heritage walks to photographic excursions and nighttime ghost tours.

Thousands of commuters flood the area at peak hours, cafés abound, and street performers entertain locals and visitors along the sunny walkways.

For tourists, this is a launching point for the popular harbor cruises, one of the best ways to appreciate Sydney’s sparkling waterfront setting. Ferries also depart from here to prime spots such as Manly, Watson’s Bay, and Taronga Park Zoo.

During the annual winter migration, whale-watching cruises take passengers out past Sydney Heads to view these magnificent creatures.

From Circular Quay, head south along the waterfront promenade to the Opera House and Royal Botanic Gardens, while a short walk to the north leads to the Sydney Harbour Bridge and the Rocks historic area.

To the west, the free Museum of Contemporary Art, housed in an Art Deco building, displays cutting-edge and, often controversial, exhibitions.

Younger children will love the carousel, playground, and water park. An IMAX and 9D theater, harbor jet boat rides, simulated flights and racing car adventures round out the exciting attractions. Those seeking a tranquil patch of green amid all the excitement can slip into the Chinese Garden of Friendship and sip tea among the willows and koi ponds.

Originally built as a market hall between 1893 and 1898, this elegant building is crowned by a high central dome surrounded by 20 smaller domes. After decades of neglect and even plans for demolition, this grand sandstone building was restored to its original state in the early eighties.

Today, more than 200 high-end shops line its light-filled galleries. It’s worth a visit even for those who shun the shops, just to admire its successful restoration as well as its beautiful stained glass windows and mosaic floors.

Sydney Tower
Soaring above the city skyline, the 309 m high Sydney Tower is the city’s tallest building and one of its great landmarks (other than the Opera House and Harbour Bridge, of course). This golden spire-topped turret rises from the busy Centrepoint shopping mall.

Express lifts whisk visitors to the observation deck at the top or to SKYWALK, an alfresco glass-floor viewing platform. While up there, sightseers can enjoy panoramic views of Sydney and its surrounding suburbs or grab a bite to eat at one of the revolving restaurants or the café. Also on offer is a 4D cinema experience, which provides an overview of the city’s major icons.

Sydney Beaches
Sydney is famous for its fabulous beaches. Tucked around the harbor are many sheltered coves with calm water and sugary sands.

Less than a 15-minute drive from the city, iconic Bondi Beach beckons with its great surf, café scene, and cosmopolitan vibe. For fantastic ocean views, take the coastal walk along the cliffs from Bondi to Coogee. Other ocean beaches include Cronulla (the only one easily accessible by train from the city), Bronte, Tamarama, and Maroubra.

A 30-minute ferry ride from the city, Manly is a favorite seaside destination with its beachfront promenade, netted ocean pool, and excellent shops and restaurants. Further north of the city, surfers will find some fantastic breaks at Collaroy, Dee Why, and Narrabeen. Swimmers should stay between the red and yellow flags.

Volunteer lifeguards patrol the surfing beaches on the Pacific during the summer and run popular lifesaving competitions.

George Street
The oldest street in Australia, George Street was once a nameless track trodden by convicts fetching supplies of water. Today, it’s one of the city’s major traffic arteries where high-rise office blocks, shops, and historic buildings converge in an incongruous jumble.

An architectural highlight is the elegant Romanesque-style Queen Victoria Building replete with graceful domes, stained glass windows, and high-end stores. Nearby, the Sydney Town Hall (1869) is a major city landmark sporting a medley of architectural styles (it’s been compared to a richly decorated wedding cake).

Another architectural standout is the neo-Gothic St Andrew’s Cathedral completed and consecrated in 1868. Shoppers will find plenty of stores in the area. Designer boutiques and jewelry stores line the Victorian-style Strand Arcade, while Pitt Street Mall, one block east from George Street, is one of the city’s major shopping precincts.

The gardens were established in 1816 and encompass 30 hectares of themed gardens with towering trees, palm groves, orchids, ferns, and flocks of fruit bats. Among the highlights is the Palace Rose Garden, which includes some 1,800 roses, and the Rare and Threatened Plants Garden.

For the less energetic, a hop-on, hop-off train tours the grounds. After exploring the gardens, visitors can relax at the café or restaurants, or enjoy a hillside picnic with beautiful harbor views. Surrounding the gardens is the Domain, a popular event venue with open green space and sports areas.

While at the gardens, visitors can enjoy views of Government House, the official residence of the governor of New South Wales.

Kings Cross Governor Macquarie
About 2 km east of the CBD, Kings Cross or “The Cross,” as locals call it, is Sydney’s multi-faceted red light district with an intriguing, Bohemian past.

The area was an artistic quarter around 1920, until it evolved into a popular haunt for beatniks during the 1950s and, later, hippies. During the Vietnam War, the area started its slow slide to depravity when large numbers of American troops came here on “rest and recreation” leave.

Despite its less than savory reputation at night, during the day, it wears a different face. Backpackers from the many hostels in the area huddle at hip cafes, boutique hotels beckon, and foodies come here to dine at the trendy restaurants. Look for the large Coca-Cola billboard, at the intersection of William Street and Darlinghurst Road, which is often referred to as the “Gateway to The Cross”.

Taronga Zoo
Enjoy close-up encounters with exotic wildlife plus superb views of the Sydney skyline at Taronga Zoo. Nestled on a point along the north side of the harbor, the zoo inhabits prime Sydney real estate in the posh suburb of Mosman.

Highlights include the Lemur Adventure Park, Koala Encounter, and Seal Show. From the city, buses to the zoo depart from Wynyard. Better still, visitors can hop aboard a ferry at Circular Quay. The zoo’s lively events calendar includes “Roar and Snore” overnight zoo stays and a summer concert series.

The building dates from 1885 and houses spacious light-filled galleries and Grand Courts with collections ranging from works by the European masters and Asian artists, to evocative contemporary art from around the world.

The gallery also houses one of the largest collections of aboriginal art in Australia. After admiring all the masterpieces, art lovers can relax at the café or restaurant, or browse the gallery gift shop.

It is the only major airport serving Sydney, and is a primary hub for Qantas, as well as a secondary hub for Virgin Australia and Jetstar Airways. Situated next to Botany Bay, the airport has three runways, colloquially known as the “east–west”, “north–south” and “third” runways.